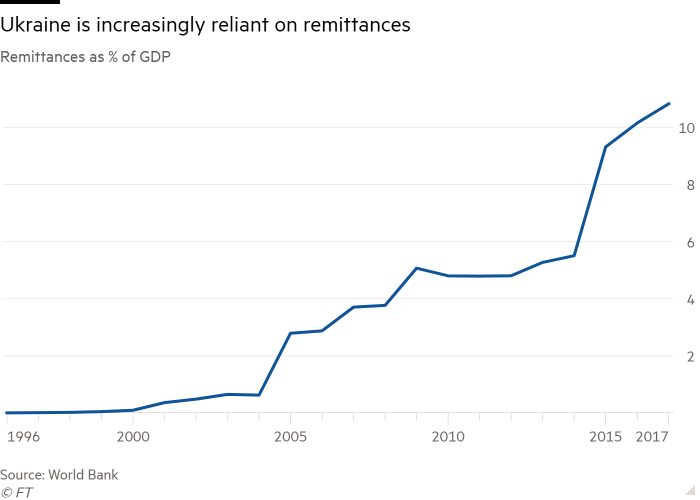 The dilapidated façade of Lviv’s international bus station is draped with a banner advertising the new developments that are mushrooming across the prairies of western Ukraine, as cash from locals abroad floods into the property market.

Ukraine is Europe’s biggest recipient of remittances in proportion to the size of its economy. More than 11 per cent of Ukraine’s gross domestic product comes from remittances and its 5m-strong workforce abroad last year sent home a record $14.4bn through wire transfers and cash carried across the border.

The lion’s share of these workers are from Ukraine’s western regions around Lviv, the 1m-strong provincial capital an hour’s drive from Poland where there is a two-decade-long tradition of working both seasonal and long-term jobs across the border, from construction to vegetable picking.

Money and goods sent by workers and other people living abroad to their families and friends at home. As global migration patterns have intensified over the past couple of decades, remittances have grown to become a significant contribution to some countries’ economies.

A widespread distrust of local banks means that workers abroad are pouring their cash into other assets, particularly real estate. As a result high-rise apartment complexes are sprouting up around Lviv and property developers say migrant labourers are some of their biggest customers.

“I purchased a brand-new apartment last year . . . paying $42,000 in cash,” said 27-year-old Serhiy before he boarded a bus back to Warsaw. For nearly three years he has earned $1,500 per month by cooking in a Polish restaurant, nearly triple what local venues pay.

“I would never have been able with the local salary to buy a flat of my own for my wife and baby,” he said. “I’m going back now after a two-week visit to my family as I need money to do the interior . . . [but] I want to ultimately live and work at home, maybe opening up my own restaurant.”

Between 1m and 2m Ukrainians work in Poland, drawn by a combination of linguistic ties, geographical convenience, higher wages and better economic prospects. Salaries are three times higher than back home, and gaps left by young Poles heading to western Europe have caused labour shortages.

As western Ukrainian emigrants push deeper into Europe in search of higher wages, they are being followed by a second wave of migrant workers fleeing Ukraine’s war-scarred east. Government forces’ battle with Russian-backed separatists has reached its fifth year. Russian, their commonly spoken language, is increasingly heard on the streets of Warsaw and other Polish cities.

“The percentage who come here from eastern and southern Ukraine has increased,” said Myroslava Keryk, head of Fundacja Nasz Wybor, a Warsaw-based foundation that supports Ukrainians in Poland. “Previously it was mainly western Ukrainians. Usually, they go back and forth [across the border].”

On the outskirts of Mykolaiv, a town of 14,000 in western Ukraine’s farming country where generations grew up in traditional one-storey homes, many luxurious new properties are under construction. Roma Fedoriv, a local resident, estimated that half of them were being financed by workers abroad.

“This one is Italy . . . the woman worked for many years in Italy to support her family here, then married an Italian and this house started to go up about five years ago,” she said, pointing across the street to an imposing villa with columns at its entrance and a castle tower.

And the litany continued: “That one is being built by a young couple working in France. The owners of that house make money in the Czech Republic . . . the one across the street, they also work in Czech Republic. The one over there, they worked for years in Russia but now are going to Europe for work to finish the house. The first one on the street over there is built on money earned in Poland.”

Some residents did not want to talk to journalists as they feared drawing tax office attention to their overseas income, Ms Fedoriv added.

With so many Ukrainians working abroad, manufacturers who have built Ukrainian factories in an attempt to benefit from the country’s low cost labour are struggling to find enough hands.

Andriy Beyzyk, managing partner of Western Ukrainian Management Consulting, said a regional visa-free regime introduced in 2017 and free trade and association agreements with Brussels made it easier for workers to go abroad. “We are integrating with the EU, including the labour market . . . This is creating pressure to raise salaries,” he said.

Investment Capital Ukraine analyst Mykhaylo Demkiv emphasised the benefits of working abroad: the experience has a “very important educational effect” which increases productivity of workers that return, he said.

That view is echoed by Ukraine’s workers too.

Back on Mykolaiv’s outskirts, construction workers hired to erect brick pillars for a new home’s fence ponder how to return to Poland. Both are close to finishing new family homes of their own.

“It’s good that [migrant labourers] are bringing this money back and building these homes as it creates jobs, but we get paid several times more for this line of work in Poland,” said Roman.

Having recently worked in a Polish coal mine, his co-worker Ihor added: “I’m awaiting a fresh invitation to work again in Poland.”